WORTH A THOUSAND WORDS 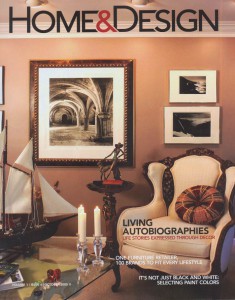 Celebrated images by Ansel Adams, Andre Kertesz and Edward Stieglitz cover the walls of Monte and Mickey Nagler’s Farmington Hills home. While many of the more than 80 iconic photographs are museum worthy, the images that mean the most to the Naglers – and hold the most memories – are the ones Monte took on his travels during 30 years as a fine art photographer.

Touring the Naglers’ home is like taking a quick trip around the world.

Michigan isn’t forgotten, either. A scene of Bond Falls near the Porcupine Mountains in the Upper Peninsula holds a place of honor in Nagler’s library/office. A close-up of the Orpheus fountain at Cranbrook graces the living room and a detail of the state capitol dome’s interior hangs near the stairs.

Nagler’s images of his home state were recently exhibited at the University of Michigan and the subject of a coffee table book. Gov. Jennifer Granholm, who wrote the introduction, has called him “one of our state and national treasures.”

“I like to mix things up,” Nagler says. “Surrounding myself with these images inspires me every day and makes going to work a joy.” He teaches photography through Schoolcraft College, and in Brighton, Birmingham and Farmington Hills.

Nagler began collecting photography in the 1970s, about the same time he turned his one-time hobby into a profession after taking a workshop from master Ansel Adams. “It was during that period that I realized making photographs is a way to experience beauty instead of just looking at it,” he says.

He started buying fine art photography any time he had $100 to spare.Today, some works, such as Barbara Morgan’s portrait of Martha Graham titled Letter to the World, Alfred Stieglitz’s “The Steerage” and Ansel Adams’ El Capitan Winter Sunrise, are worth thousands of dollars. Images of famous Americans from Babe Ruth to Martin Luther King – some taken by the late Tony Spina, Nagler’s friend and longtime Detroit Free Press chief photographer – hang throughout the home.

Nagler says he appreciates color photography, but loves black and white best. “Color is like going to see the movie, but black and white is like reading the book,” he says.

The Naglers believe in living with what they love, so much that they had the motto “Surround Yourself With What You Love” stenciled over their kitchen sink.

“We really believe it,” says Nagler. “Our home is a true reflection of us.”